Fold paper into a heart

WonderHowTo This video shows us how to fold a simple origami heart. Firstly a piece of paper is taken and is cut in the form of a square and then it is folded into half to form a rectangle.

Here's a step-by-step How-to by Alex Yue, the origami master who folded our paper hearts for Hannibal in Season 3.

It is an adaptation of the classic ball origami fold. Flip so open folds are at the top then lift and separate side to open a pocket With your finger inside the pocket, push A counterclockwise and press C out as you push B under so that C will pop out to the position you see in the photo below.

It's tricky, but don't give up. Just work gently to ease the paper into place. It wants to be a heart. Now fold the outer corner under from D to E so it looks like the photo below. This is fantastic that you've made it this far.

It's all easy-breezy from here. Repeat on other side. Now you just have to fold the big arteries, slide them into place and blow a little air into the opening at the top so the heart puffs out like a football. For more really amazing origami check Alex's site: Find the instructions here: This site has some annoying pop-up ads but I guess that's Google doing what it does.

The site has all kinds of heart origami to choose from so if you don't mind the ads, press on.Draw and cut out a heart shape on one of the paper plates. Fill the zip lock bag with Hair Gel and foil confetti, slide the zip lock shut and fold over the join a few times to ensure it fits inside the plate.

The traditional paper crane is probably the most famous of all origami models. It’s designed after the Japanese red-crowned crane. In Japanese mythology this crane is known as the “Honourable Lord Crane” and it wings carried souls up to heaven.

The ostensible purpose of a library is to preserve the printed word. But for fifty years our country’s libraries–including the Library of Congress–have been doing just the opposite. 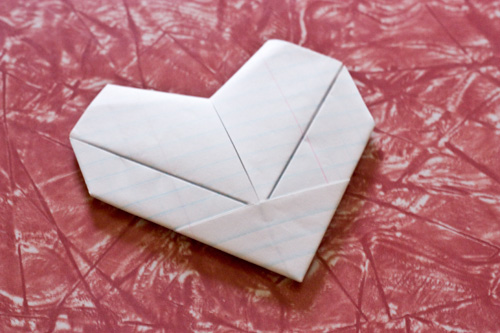 First, before you start if you are a beginner or intermediate folder, please review this page on origami basics, which covers folds and bases. Folds - valley fold, mountain fold, petal fold, rabbit ear, squash fold, reverse fold, crimp, sink. u cant really fold it into a heart but u can cut it into a heart shape!

this is how: 1. draw a heart 2. fold the paper in half 3. cut the heart out. I started by folding a piece of construction paper in half and cutting out a traditional heart shape from it to use as a template.

Then I used my practice heart as a template, traced around it with a pencil, and then cut it out from my fancy paper.